After I was finished discovering Remedios Varo’s life and life work, I returned to the artist who had introduced me to her:  Leonora Carrington.  What had started out as a seeming fluke was becoming something slightly bigger to me.  A friend of mine, Maureen McHugh, who is also one of my former writing teachers, once told me that writers write about their obsessions, when they’re doing it right.  The things that consume them.  And these artists and their work had begun to seem a bit like an obsession to me.  The worlds they created resonated with me, and I wanted to find a way to live inside those worlds for a longer period of time than I could simply by looking at their paintings.  So writing stories became the way I could engage with them more fully.

But it was also through the research into their own lives that I began to see a pattern emerging.  A pattern where women artists were excluded from surrealist art circles, except as romantic attachments.  But even then, attached as a girlfriend or wife, they weren’t seen as equals, regardless of the superior work they were producing.  They were seen as hobbyists.

One of Carrington’s most famous paintings is known by various names. “The Giantess,” or “The Baby Giant,” and (my personal favorite), “The Guardian of the Egg.” 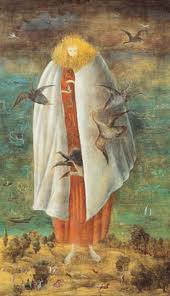 In the painting, a giantess with a cherubic face shrouded in golden wheat stands within the confines of a rustic village with the ocean tumbling behind her, Viking boats riding the waves. She appears to have just arrived on the scene, and within the cup of her comparatively small hands she holds an egg. Below her, villagers have arrived to combat her with pitchforks and guns. She’s clearly seen as a threat to their way of life, though she bears life itself—the egg that she holds—as its guardian spirit.

This was the image that I wanted to work with from Carrington’s prolific collection of paintings.  And unlike Varo, I didn’t get a sense of continuity in terms of “world story” from Carrington’s work, so this was the lone painting that I intended to work with.  It set me up for quite a different process in story-making.  Unlike Varo’s work, where individual paintings provided me with protagonist, antagonist, setting, sub-character, etc, I would need to draw all of my story resources from one painting alone.

It made me think about my approach differently.  I needed to think of the painting as a question.  What’s occurring here?  What does this scene depict?

The painting demonstrates the wealth of metaphoric imagery that Carrington used to explore her own strict and restrictive upbringing in an upper class industrialist’s household, where her father did whatever he could to obstruct her path to becoming an artist, which Carrington would always see as an obstruction particular to her being a woman who wanted to pursue a career that would lead her away from the manners and mores of her family’s way of life. But the painting also represents a broader concern with the generally small-minded, old-fashioned, rustic “villager” mindset, which holds fast to traditional roles for men and women. The appearance of the giantess on their shores is a perceived threat to their lifestyle, which has surely prepared them more to expect the appearance of a god rather than a goddess. But there she is, unable to be ignored, larger than life, right in front of them.  In every single way, this painting felt like a metaphoric icon for Carrington’s own battle as a female artist within a culture that would confine her to pre-approved and pre-arranged social roles.

But she was too big for that.  Way too big.  If you look into her back story, she was quite the heroine of her own life.  She ran away from home to join the surrealist circles in Paris at a young age, took up with Max Ernst, was listed as a dissident by the Nazis and fled Paris to Spain, where she was virtually imprisoned in a psychiatric hospital by her parents and treated with drugs that were later banned by authorities.  A few years after her release from the hospital, she wrote down the experiences in a small book called Down Below.

Knowing a bit about Carrington’s life and how she reworked her autobiography into visual metaphors of magic, I decided to explore the arc of her story–a young woman who grows larger than life, larger than the roles that are available to her in her constrictive community–as a modern tale.  So instead of rustic villagers meeting the goddess with their pitchforks and guns as she comes ashore, I wrote a story about a seventeen year old girl who is confronted by the many small minds of her suburban American community as she begins to grow into a Giantess and eventually reveals a secret to her brother, the narrator, about her true purpose in life.

I linked to that story in a previous blog post, but I’ll do so again here, in case you’d like to read one of the stories for free:  “The Guardian of the Egg”.  If you like it, I hope you’ll get the book and enjoy the other two stories, and the essay at the end.

In the near future, I’ll be posting about the third artist in this triptych:  Dorothea Tanning.

It was Tony’s birthday this past weekend, so we made David Chang’s bo ssam and sesame noodles and ohitashi (Japanese spinach dish) pickled cucumbers, kimchi fried rice, and miso maple roasted carrots. I think I want this to be our thanksgiving meal next year now. #yum #momofuku
A little bit of our Christmas at home this year, just the two of us. I hope it’s the only Christmas we have to spend without the usual gatherings ever again, although I will say it certainly has been peaceful and restful. #merrychristmas
A Christmas present for myself: something to read over the holidays, fantastic poetry from my friend Kelly Bancroft! #poetry