Last night I had the pleasure of watching Jamie Marks is Dead, the movie based on my first novel, One for Sorrow, in Cleveland, Ohio, with a bunch of friends and family. It was so good to finally have others who I’m close to, people from my community, see it as well. Before it had felt a little bit like Big Bird’s relationship with Mr. Snuffleupagus. No, really, there is a movie out there adapted from my novel! It’s not just imaginary!

Here is me and the director/screenwriter, Carter Smith, who made a surprise guest appearance to do Q&A with me after the screening. 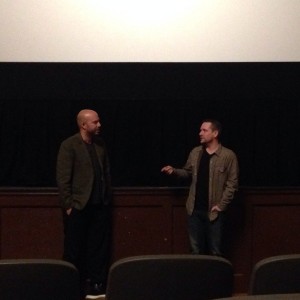 The film debuted as one of sixteen competitors in the dramatic category at the 2014 Sundance Film Festival. From there it went on to screen this past summer at Newfest in NYC and Outfest in LA. Now it’s in a limited theatrical release in major cities, as well as also available on video on demand platforms.

Here are the cities where it’s playing:

And here are the video on demand platforms where you can purchase it or rent it to watch in your own home:

I hope as many of you out there as possible can watch it too. It’s really a dream of a film. I mean that. It feels like a dream, or a nightmare, that you wake up from more than a conventional film. When the Washington Post reviewed my novel when it first came out, they said, “Traveling through this story with Adam is like a nightmare, but the kind that fascinates you so deeply that when you wake up, you grab the first person you see and tell him about it.” The film feels that way to me too. So I hope you enjoy the pleasures of dream logic.

The New York Times recently reviewed the film incredibly favorably. I hope you find it as fascinating as others are finding it.