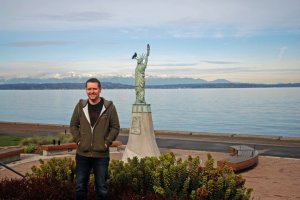 Home again from spending five days in Seattle, where I saw eagles nearly every day (a good omen or portent, I’m told), rode a ferry out to Vashon Island, where I spoke with really awesome, smart high school students about writing, Japan, and my second book, gave a reading at University Bookstore, where I met possibly the best bookseller ever, enjoyed the company of old friends at a local writers dinner (hey Johnzo and Victoria, Ted and Marcia!) as well as the company of new friends (hey Matt and Meghan, Les and Diana!), and lead a seven hour long writing workshop at Richard Hugo House.  Wow, seven hours exhausted me.  But I bet it exhausted my students even more.  They, after all, were doing most of the writing that day.

Seattle is a gorgeous, wonderful city, large yet easy to manage, insanely urban yet full of nature reserves, and it seemed the majority of its consumer oriented businesses were largely local, rather than imported from huge elsewhere corporations.  And those huge elsewhere corporations that are there seem to largely be locally grown big businesses.  There’s a different vibe in the air there, a chilled relaxedness, and this was really a nice change to experience.  I look forward to returning when I’m not scheduled to work, so I can climb some mountains, see more islands, more eagles, more owls, and explore the city even further.

Thanks to Les Howle for bringing me out!